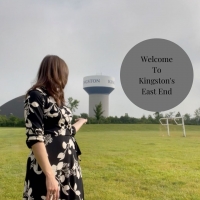 Relocating to Kingston? Here is a little bit about the East End of Kingston

Moving to Kingston?  Today, I want to talk about the East End of Kingston.  I have attached my video tour of the East end to the end of this blog if you prefer to jump down and watch the video.

Before we get started, you probably want to know what I’m talking about when I say the East end of Kingston.  From downtown Kingston, you will have to cross the Cataraqui river, to get to the East side, you can take the causeway or go around on highway 401.  Later this year hopefully, there is a 3rd crossing that is supposed to be completed which will hopefully help with congestion getting to and from the East end once it is opened giving you another option to get here as well!  Over here, you will find a few different neighbourhoods, some a little older and some new homes that have been built and are still being built.   To give you an idea of home prices, to get a home in the 31-50 year old age range, 1300 square feet you're looking at about $550,000.  To get a 2,000 square foot home in the 6-15 year old age range then you're looking at about $900,000.   There are a few schools over here as well.  You have Kingston East elementary school offering kindergarten to grade 6 with both English and French immersion programming, there’s Saint Martha Catholic School and Lasalle Intermediate And Secondary School offering grade 7 and 8 as well as grade 9-12.  Also, over here you will find the Royal Military College of Canada which is the military college of the Canadian armed forces.  As for shopping, you have all of the basics that you need, your groceries, drug stores, convenience stores, pubs, coffee shops and take-out.  Your big box stores, you will have to go over to the West end of Kingston for.  For gyms, you have a couple of smaller gyms over here and then you have the CFB Kingston Base Gym which is a great facility that has a pool as well and the newly built Kingston East Community Centre also has a YMCA gym.   There's a bunch of different parks over here too.  I will attach the video below so that you can check out my tour of the East end.